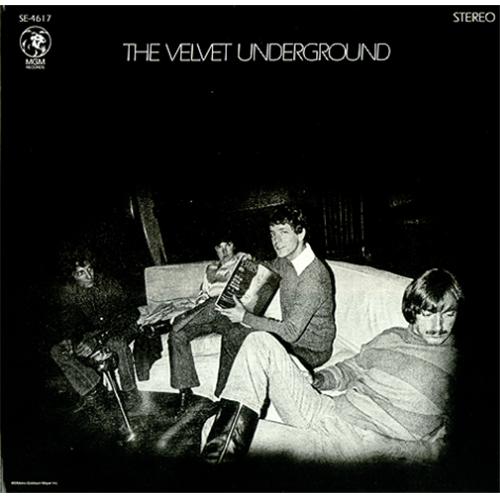 Glenn: Let’s clear one thing up: “The Murder Mystery” is awesome. Anybody who disagrees hasn’t caught onto the Velvet’s project, which is to use drones, pulse, and deadpan-specific lyrics to create a trance that contains an entire world. Anything else the Velvets do — sing, change chords, play feedback, take speed, let Nico do her thing — is extra. While “The Murder Mystery” isn’t a typical Velvets song, it does have the elements I’ve just identified, plus a wild bouncy-piano-with-vocals outro.

After listening to the demos and live stuff from the Peel Slowly And See box (see below for a live “What Goes On” that kills), I’m convinced that the Velvets were after some kind of secret chord-pulse-noise mechanism that could transcend space and time. In other words, they were trying to be Can or Bitches-era Miles Davis, before Can or Miles dreamed a way to the astral plane. The thing is that the Velvets were also Long Island dopes who wrote folk-pop songs. The tension in their music is the tension between trying to get free and trying to keep together — the dichotomy Dave Hickey traces in his classic essay about the differences between jazz and rock and roll.

The Velvet Underground is the Velvet Underground at their most quintessential. I don’t believe it’s their best album, but I think it illustrates best what they were trying to do, which was to wrap melodies, lyrics, and freaky noise around an undeniable pulse. In essence, that’s the goal of rock and roll from Bill Haley onward. The difference is that the Velvet’s pulse is not funky or danceable or sexual, but tense and worried, like your breaths when you realize you are “One minute born/one minute doomed.” A lifetime lies between thought and expression, and the Velvets provide the heartbeat.

Jordy: I’m glad you picked this album, Glenn. It would have been much easier to find something to say about any other Velvets record. S/T stands alone as Lou Reed’s least distinguished album (note the dork in the sweater on the cover).

That’s not to say that I don’t like it. In fact, I would consider it a baseline for what rock ought to sound like: insistent grooves (perhaps Glenn’s “pulse”) in “What Goes On” and “Beginning to See the Light”, mixed with touching musings in “Candy Says” and “Pale Blue Eyes,” and a couple straight-up ditties in “That’s the Story of My Life” and “After Hours.” Everything here was so well-written that it seems like a template for all rock that followed. Perhaps this is a corollary to Brian Eno’s observation that while not many people listened to the VU while they were active, everyone who did started a band.

So all those people who started bands after hearing the Velvets wrote some great songs which ended up sounding like those on The Velvet Underground. This is probably why the album sounds unremarkable: it gets obscured by all the smoke that it created.

Wait…one remarkable thing about this album is how bad “The Murder Mystery” is. You bit off more than you can chew there, Glenn. I liked “The Gift” on WL/WH because its spoken narrative was hefted by a heavy-as-fuck groove. Here you can’t even understand a word they’re saying and the music is rambling. It’s like they let Andy Warhol stick his toupeed head back into the band to write a song. Worse yet, it kind of sounds like the Doors.

Glenn: Don’t even fuck with the Doors. The Doors are awesome. But I digress. I like the swirling nuttiness of “The Murder Mystery.” It’s two insistent grooves juxtaposed; it sounds almost like techno from the ’60s. And the guitar tones are incredible. As for the lyrics….so what? I mean, you can’t understand a word that Damo Suzuki says, and you still like Can, right?

But you’re right, Jordy — there’s a workmanlike quality to this album that sounds unremarkable. At first. It took me a few listens to notice the feedback-drenched guitar on “What Goes On” and the “Heroin”-esque buildup of “I’m Set Free.” These songs are both mainstream and forward-thinking. The Velvets finally found a way to graft their craze onto simplicity.

Adam: First, Jordy, I don’t get your hostility toward the Doors. But that will have to be hashed out in a future post. I’m surprised neither of you have mentioned that this was the first album the Velvets made without John Cale. Cale’s avant-garde influence dominates the  first two albums, where this one is dominated by Lou Reed’s more traditional rock sensibilities. This album, then, is far more straightforward that the first two, save for the much-maligned “The Murder Mystery,” which I neither love nor hate. You can actually understand the words if you listen to it one channel at a time, however that won’t help you decipher any meanings, because there is no coherent narrative. The song was clearly conceived under the influence of hallucinogens. I very much like Maureen Tucker’s vocal contributions on this and “After Hours,” however.

My biggest complaint with this album is that some of the songs seem to be a minute or two too long. This is especially apparent on “Some Kinda Love” and “Pale Blue Eyes.” The former has a great groove that feels like its going to go somewhere but just doesn’t, and the latter is a great song, but it would would be much better if it were under four minutes long. To me, “Pale Blue Eyes”  feels like a traditional lost-love ballad, and those kinds of songs are not six minutes long. The songs that aren’t too long or too abstract are very good (and they happen to comprise our Four Essential Tracks for this album. Coincidence? Perhaps. Or perhaps not). Does anyone think Lou Reed got the idea for “What Goes On” from the Beatles song of the same name? They both contain the line “What goes on in your mind?” and are thematically similar.

Glenn: Well, yeah, except this “What Goes On” doesn’t suck.

Phil: I hate the Doors.